Giving Voice:
The Art of Dissent 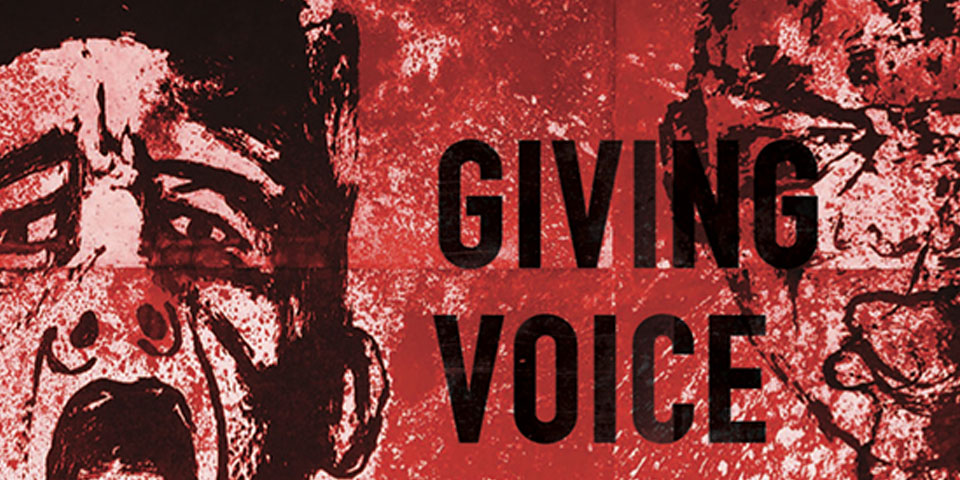 Salamanca Arts Centre (SAC) presents the group show Giving Voice: The Art of Dissent, featuring eight artists who document their opinions on the pressing social and political issues facing the world today. From major economic crisis and raging wars to pollution and climate change through to religious prejudice and racism, this powerful exhibition sheds light on a global state of distress.

Curator Yvonne Rees-Pagh has enlisted a mix of early-career, mid-career and established artists from Tasmania, Australia and New Zealand to present their work in SAC’s Long Gallery and Sidespace. Exhibiting artists are Cigdem Aydemir (NSW), James Barker (TAS), Richard Bell (QLD), Pat Hoffie (QLD), Locust Jones (NSW), Megan Keating (TAS), Michael Reed (NZ) and Khaled Sabsabi (NSW). Rees-Pagh believes the theme of the exhibition will resonate with many and notes that with the series of problems the world is facing, it is normal to feel helpless in the face of crisis. “The courage displayed by our eight artists to publically voice dissent is remarkable and something to be admired,” she says.

The exhibiting artists have grappled with the most challenging aspects of human experience, expressing dissent on topics ranging through war, racism, climate change, economic crisis and displacement in Australia and beyond.

Cigdem Aydemir is a Sydney based multi-disciplinary artist of Turkish Muslim heritage. Her practice incorporates installation, performance and video. Site occupied is a large-scale installation where the gallery floor space is colonised by the Niqab (an Islamic garment), and the single-channel video work Bombshell playfully explores the image and idea of the burqa as possible terrorist threat while referencing Marilyn Monroe’s iconic dress scene in the Seven Year Itch.

James Barker is an early career Tasmanian ‘Arab/Anglo’ artist whose works lest I forget and Gaza child draw on his self heritage and his journey as a photographer in Iraq in 2001 to craft works that bring the horrors and veracity of war to the fore.

Senior Aboriginal artist, Richard Bell, has strong roots to the Kamilaroi, Kooma, Jiman and Gurang Gurang communities in Queensland. He has been a driving force within the field of contemporary Australian contentious racial relations, describing himself as “an activist masquerading as an artist”, and this ethos is infused in his paintings I am humiliated and Kick somebody else as well as the single-channel video work Scratch an Aussie.

Brisbane-based artist Pat Hoffie is a vocal activist for equity and fair pay for underprivileged workers in countries such as Indonesia, The Philippines and Vietnam. She is recognised for her critical work on Australia’s asylum seeker policies. Her work Smoke and Mirrors references political spin and the visual trickery involved in being an artist.

Locust Jones, born in New Zealand and now based Sydney, uses his expressive drawings to synthesise and comment on contemporary news media. Unmediated Media and Everyday Atrocities chronicle and reprocess news coverage of war, globalisation, politics and the environment.

Tasmanian based Megan Keating’s Chinese heritage extends into her work as an established multidisciplinary artist.The Ministry of Pulp and Smoke draws inspiration from Chinese and Japanese tradition of paper cutting, which has been re- contextualised through installation and animation.

From further afield, New Zealand based art and design teacher, Michael Reed, aligns his work with the long history of printmaking as a vehicle for social and political comment, resulting in a constant series of satirical medallions, works on paper, textiles and carpets.

The award-winning Khaled Sabsabi was born in Lebanon and migrated with his family to Australia in 1978 to settle in Western Sydney where he creates arts projects that explore the experience of people across social, political and ideological spectrums. His single-channel video Guerrilla 2007 was made in Lebanon and tells three peoples’ stories amidst the rubble of their homes.

“For me art making is the aesthetic resistance against the way things are, a constant movement towards pushing limits and testing perceptions, on these fringes or borders is where we learn and find new ways of engaging, because through art it becomes expression and through expression one finds a platform for reason.”
– Khaled Sabasi

The exhibition is accompanied by a catalogue with essays by the curator Dr Yvonne Rees- Pagh, and essayist Pete Hay.

Giving Voice: The Art of Dissent is a Salamanca Arts Centre major curated exhibition. “We know it takes great courage to step forward in today’s Australia to ‘give voice’ to others, to step away from defining society through the lens of mainstream media that focuses on and immerses us in the negative: parliamentary conflict, border incursions, murders, wars, and difference. To take a different stand, to critique violence, war, exploitation, and multi-layered discrimination takes great humanity, to suggest another way,” says SAC Director Rosemary Miller.

Giving Voice: The Art of Dissent is a Salamanca Arts Centre major curated exhibition.  This project was assisted through Arts Tasmania by the Minister for the Arts, and the Gordon Darling Foundation.