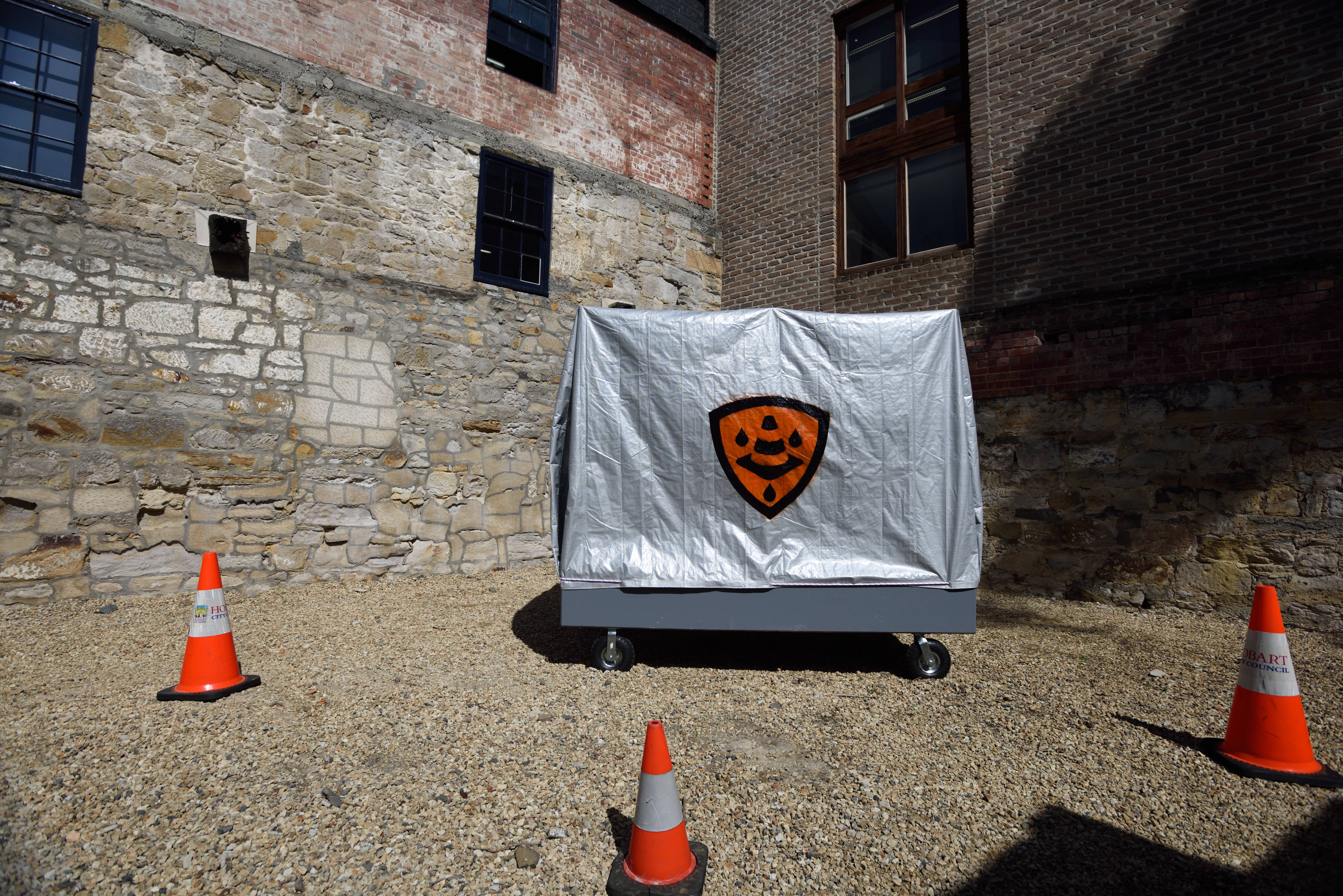 An installation and performance
by Amy Spiers & Catherine Ryan

Public order has finally triumphed over public space! It’s time to celebrate. No More Public Space, Only Public Order (Water Cannon) is an absurd, mobile sculpture of a water cannon made out of materials used to control the movement of people in urban spaces, such as temporary fencing, safety cones, crowd barriers, warning signs and barrier tape.

The work will be presented to the public in an exuberant parade around Salamanca Place. Choreographed performers will demonstrate the water cannon’s capabilities in a grand celebration.

Water Cannon Parade:
Sunday 17 January 2015 @ 11:00am
This is a FREE EVENT, but please register your interest HERE

The cannon will then be exhibited at Kelly’s Garden for a month. At a time when harsh new anti-protest laws are being proposed in jurisdictions throughout Australia, the artists hope to prompt reflection about the regulation and control of the public sphere.

Amy Spiers and Catherine Ryan are Melbourne-based artists who have been working collaboratively since 2012, through site-specific-installation, live and participatory performance art, often employing aesthetics that are disruptive, estranging and absurd. They aim to provoke questions about the present social order—particularly about the gaps and silences in public discourse, the things that are not or cannot be acknowledged. Their 2014 work, Nothing to See Here (Dispersal), was nominated for a Green Room Award for Outstanding Contemporary and Experimental Performance. In 2013 they were finalists in the Substation Contemporary Art Prize. They have presented work at the 2015 Vienna Biennale, the Melbourne Art Fair, the Festival of Live Art, The Substation, the Underbelly Arts Festival and Footscray Community Art Centre. They have undertaken artistic residencies together at the Zentrum für Kunst und Urbanistik in Berlin, Germany and at the Banff Centre in Canada.

Ashley Dyer is a performance maker, workshop facilitator and producer based in Melbourne. His work is diverse, often mixing dance and movement with everyday and extra-normal singing techniques, text, images and installations.

Ron Spiers is a Hobart-based artist and gallery technician with more than 20 years experience preparing exhibitions and constructing and installing large-scale artworks. He has provided museum and gallery services to institutions such as the Museum Of Old and New Art (MONA), Tasmanian Museum and Art Gallery (TMAG), CAST and Plimsoll Gallery.

Kelly’s Garden Curated Projects is an initiative of The Salamanca Arts Centre and made possible through the generosity of Aspect Design and fundraising from SAC’s Supporters at the SAC Quiz Night.This Project is part of MONA FOMA 2016 and is assisted by the Australian Government through the Australia Council, its arts funding and advisory body, and through Arts Tasmania by the Minister for Tourism and the Arts.and the City of Hobart.