‘Whizzer
– all my love darling!’

An installation by Nigel Helyer

Nigel Helyer is one of this country’s most significant and relevant contemporary artists. His significance derives from a long career producing ambitious, innovative art and his relevance derives from his early and continuing engagement with technology and ecological issues, where he remains at the cutting edge. The following quote provides a key to the direction his life’s work has taken:

‘’The small Sussex fishing village in which I spent my childhood contained two significant buildings, significant not for their formal qualities, they were both simple cottages, but because one had been the home William Blake the poet, whist the other, ‘Comet Cottage’ was named for the astronomer Halley. Without being conscious of the fact, I grew up in a cosmos in which the arts and science were intertwined, it has marked my endeavours ever since.’’

Nigel might well have become a scientist, or even a mariner – such are his passions. At a stage in Australian art when the Art/Science dialogue was just opening up, Nigel was already demonstrating a close engagement with both. He is someone who truly understands the languages and methodologies of science and can engage with scientists at a deeper level than most artists. It is not something exotic or strange for him, although it remains stimulating and inspirational. In the work of such artists the whole really can be greater than the sum of its parts – art is not simply the primary issue to which science is subjugated, or simply a base from which to mine superficial visual stimuli.

His artworks often resemble experiments, such as the construction of a small boat with which to traverse an ocean collecting data, to be expressed in visible and aural forms derived from the data collected. His artworks have been powered by solar panels and have articulated the tracks of Antarctic Marine creatures as in his recent ‘Vox’ iterations in which he collaborated with the University of Tasmania’s Institute for Marine and Antarctic Studies working closely as a visiting Research Fellow with Dr Mary-Anne Lea, and with the Conservatorium of Music in the presentation of the work.

Whizzer, (a playful term derived from WYSSA), is an installation which explores language and communication. It resembles a camp in the Antarctic and utilises tents which have actually been used in Antarctica by expeditioners from ANARE (The Australian National Antarctic Research Expedition). Four tents, lit from within, emit sounds. The sound is derived from the letter codes used in communication with the expeditioners and expressed by an augmented human voice. The letters in this code stand in place of words or phrases, for more efficient and economical communication, not unlike predictive text phrases. As Nigel explains:

‘’The original telecommunication from Antarctica was of course established by Mawson and relied upon Wireless Telegraphy, (ie Morse code via radio). In the 1950’s teletype machines were introduced (also functioning via Morse),  and with this came the advent of the WYSSA, in effect private telegram messages, heavily compressed as short codes with standardized meanings, allowing communication between expedition ears and their next of kin.’’

The system is very simple. It selects at random an audio file (these consist of a concatenated voice reading out the five letter ANARE code, (in the NATO alphabet), and followed by a voice relaying the message.  Thus WYSSA is rendered “Whiskey, Yankee, Sierra, Sierra, Alpha, Darling I Love You.”
At the same time the system selects a Biologging Data file collected from data recorders attached to Southern Elephant Seals by Marine Scientists of IMAS.  The data is ‘ involved with the audio content to generate a second stream if audio which is in effect a harmonic mapping of the vocal material, the playback thus being the vocal original and its data modified ghost”

The work suggests isolation and distance, a presence is implied within these tents. The sounds contain audible voice and language but they are contained within a sound element deriving from the source of the data. At the conceptual level this creates a palpable connection with the world of the creatures for whom this is home, and which for us is the antithesis of home.

Early electronic communication of sound was subject to much interference from atmospheric conditions and the loss of signal strength over long distances. It was fraught with dropouts and distortions as well as fluctuations in volume. Often the listener would have to concentrate intently and patch over bits of the conversation, losing some parts altogether. The caller’s voice would suffer distortion, at times not even sounding like the caller’s voice. The fluctuating volume reminded one of the real distance involved between caller and listener as the voices seem to disappear and return, always at the risk of fading away altogether.

The intermingling of the sounds in this installation evokes these things for me. It demands a more intent listening because we are aware that there is meaning here. An attempt is being made to communicate yet it retains the mystery of the word half-heard or the sounds of exotic worlds. Yet this engagement is not achieved as an equivalent or a theatrical dramatic evocation (wind, water, ice-cracking). It is achieved as an expression of the elements being explored. It stands beside and draws on fact, on data, and familiar things yet creates a new artistic expression of their innate character and mystery.

Visually and aurally this powerful installation evokes, in a poetic and subtle way, the notion of hanging by a thin thread, in a far away and dangerous place and grasping whatever means exist to ensure that the world outside still exists and is not merely dreamt. 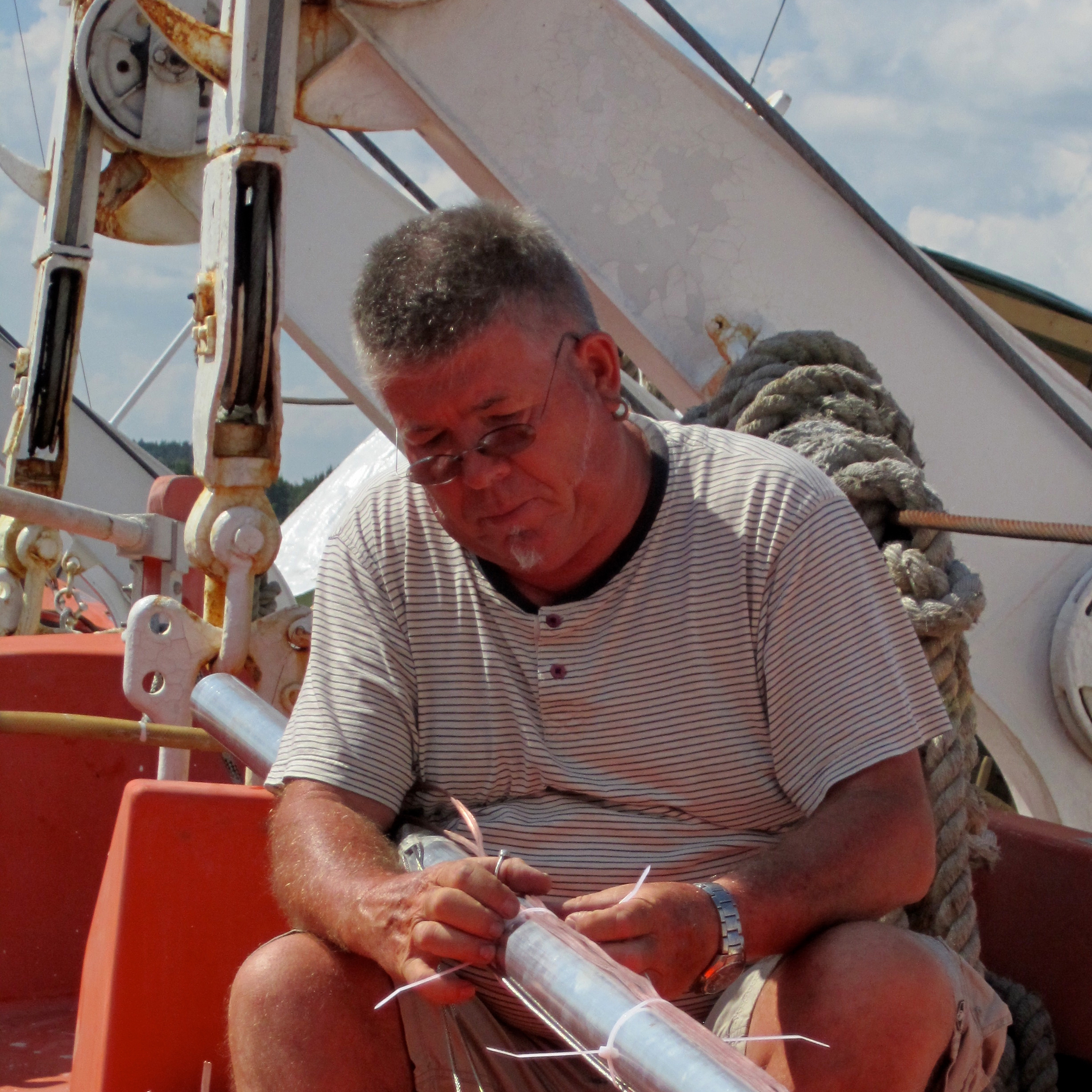 Nigel Helyer is an Australian sculptor and sound-artist who received a BA Hon’s in Sculpture from the Liverpool College of Art, UK in 1974, a MARCA in Environmental Media from The Royal College of Art, London, UK in 1979 and his Doctorate from the University of Technology, Sydney in 1997. In the decade prior to his participation in the 2002 Biennale of Electronic Arts Perth (BEAP), he developed a cross-disciplinary practice which brought together previously discreet conceptual and methodological practices. This saw him develop work which synthesised sculpture with architectural & environmental sites and combine performed soundscapes (textual, musical or electronic) with public radio broadcast and other new-media formats. Helyer has exhibited widely and been the recipient of several grants and fellowships. For instance in 2002 he undertook a research fellowship at the SymbioticA bio-technology research lab at the University of Western Australia, and in 2004 he was Artist in Residence at the Paul Scherrer Institut in Villigen, Switzerland. Helyer was a founder and commissioner of the “SoundCulture” festival organisation and has been an honorary faculty member in Architectural Acoustics at the University of Sydney for several years.