Kelly Drummond Cawthon was raised in Tasmania, Australia. After a childhood spent in acrobatics and musical theatre, she began her contemporary dance training in South Australia where she completed her Bachelor of Arts degree at the University of Adelaide and traveled to the United States to pursue an MFA degree in dance choreography and performance at Florida State University and an MA in Performance Studies at NYU.

Her experiences as a professional in the worlds of dance and theatre, and in the field of Higher Education span over two decades of performance, choreography, directing, research and teaching. She has performed with dance and theatre companies including Outlet Dance in Australia, and The New Dance Group, The Doris Humphrey Repertory Company, Joy Kellman, The Hudson Vagabond Puppeteers, Motion Pictures Dance Theater Inc. and most prominently, Shapiro & Smith Dance in the United States. Her work has been presented across the United States, in Canada, Europe, Bulgaria, Brazil, Russia, Uzbekistan, Australia and Korea; at International Dance Festivals including the Edinburgh Fringe, Off the Edge International Canada, Dance In A Suitcase Varna, American Dance Festival, and Florida Dance Festival; commissioned and produced by numerous College and University Programs; and presented across the globe using Internet 2 Digital Technology in venues such as the Global Super Computing Conference, Monaco International Dance Festival, Internet 2 Annual Conference and Si-Dance Korea.

As a member of the faculty of the University of Florida School of Theater and Dance for over ten years she had the opportunity to imagine and realize new curricula, collaborate with Colleges and faculty across the US, and participate in the research and learning communities of creativity, performance and technology. As an Associate Professor of Dance and Assistant Dean for Administrative Affairs in the College of Fine Arts, she has taught and developed curriculum in dance technique, composition, repertory, ensemble, pedagogy, performance theory, aerial dance, art and new media, transdisciplinary collaborations and creativity. As a founding member of the award winning Digital Worlds Institute she collaborated in pioneering interdisciplinary research and teaching.

Beyond her traditional teaching and administrative load, she launched and directed the University Repertory Company, The Florida MOD Project, directed main‐stage seasons, recruitment fairs, community outreach programs, initiated interdisciplinary curriculum development, performances and inter‐collegiate performance exchanges and tours through The People’s Touring Project. She staged and mentored work to every Regional Gala and National Festival of the American College Dance Festival held biannually at the Kennedy Center for the Performing Arts in Washington, DC. She collaborated in the development of programs to enable students and faculty to tour across the state of Florida, to Minneapolis, New Orleans, Connecticut, New Jersey, Texas, Montana, Colorado, New York, Russia, Brazil, and the Edinburgh Fringe Festival. Through her work with the Digital World’s Institute she participated in trans-continental collaborations with Korea, the United Kingdom, South America and Australia.

Kelly is currently the Arts Coordinator, and director of the SPACE dance program at Salamanca Arts Centre, Creative Producer and Teaching Artist in Residence for Kickstart Arts, and an independent performance artist. In 2012 her creative work included collaborations with the Second Echo Ensemble, and at Kingston High School as an arts@work artist in residence.

Watch a video of Kelly at work with collaborator Julie Waddington while in residence at Kingston High School.

Check out the AIR Project blog 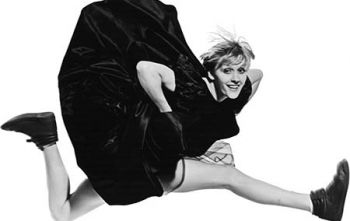