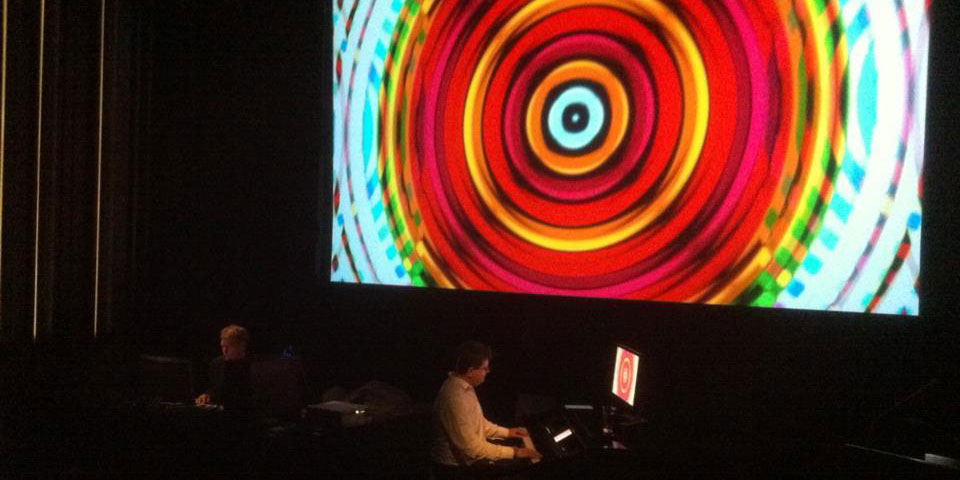 The Project in a nutshell is for Rodney Berry to rigorously map out the details of Palle Dahlstedt’s synaesthetic linking various colours to musical notes and chords. He will make a program on the computer that analyses the live data from a keyboard and build changing palettes of colour that match what Palle sees when he hears and plays music and use the colours in live graphical ‘scores’ that guide Palle’s improvisation on-the-fly and are, in turn, guided by it. The two artists will work to develop ways of ‘jamming’ together and creating conversations between colour and music that can lead to improvised performances. The goal of this project is to develop the ideas and the underlying technological systems without the logistics and distraction of preparing for an immediate performance. Performance is of course the goal and will be the focus of the next grant application once this phase of the work is complete.

Rodney Berry is a composer and media artist as well as a highly published researcher into human-computer-interfaces. His work has been shown in international and national art events such as ISEA (Sydney 1992, Nagoya 2002 and Singapore 2008) and SoundCulture (Sydney 1991 and Tokyo 1993), experimenta (Melbourne 1994) and Perspecta (at The Performance Space, Sydney 1997). He has presented art works and more than fifty scholarly papers at scientific conferences internationally. Recently, he performed with the Syn[a]: group at the Museum of Old and New Art as part of the Synaesthesia event and also worked with Nigel Helyer and researchers from the Institute of Marine and Antarctic Studies at UTAS to visualise and sonify data gathered by southern elephant seals in the antarctic. He works primarily with TouchDesigner software for visualisation and audio control and has programmed interfaces for control through human movement using the Microsoft Kinect devices.

Visit Rod’s website for more information or check out a sample onvimeo.

Palle Dahlstedt is a composer, improviser, pianist, synthesist, sound artist, programmer and researcher. He lives with his family on the island of Brännö, on the West coast of Sweden.Curently an associate senior lecturer in computer-aided creativity at the  Department of Applied IT, Chalmers and University of Gothenburg, Academy of Music and Drama, University of Gothenburg, Sweden. He is also Artistic Director if the academy’s Lindblad Studios. Palle’s work ranges from large scale orchestral scores to improvisation on home-built synthesisers and his own software that produces sound and images from simulated biological processes.