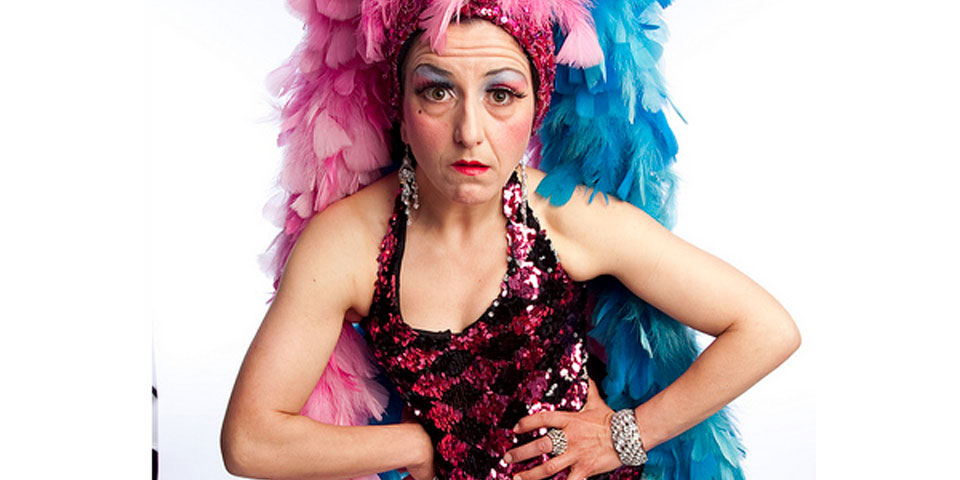 A one-woman, “pop-up” cabaret performed in and around a free-standing, oval-shaped and curtained structure, which can be easily dismantled, both in indoor and outdoor settings. Rose will be performing as five separate characters, incorporating dance, song, burlesque, projection/shadow play and cooking, all centred around the theme of Love and Loss. The characters are: ‘Mamma Rosa’-a brash, middle-aged Italian lady, trapped in a loveless marriage, who cooks, sings, and dances to keep her sanity. She gives out home-made biscotti at the end of her performance…. ‘Catalogue’-a charming, feminine, but slightly unhinged French maid, looking for the perfect sugar daddy, who will ‘keep her nice’. She cleans incessantly and sings non-sensical French songs. ‘Elvis The Pelvis’, a silent, androgenous burlesque stripper obsessed with doughnuts and excess. ‘Le-ah’ (pronounced Ledasha), a bogan aspiring salsa dancer from Goodwood, who wants to break the mould and dance her heart out. ‘Vanillah’, a washed-up cabaret singer, jaded through loss, but undeniably has a last glimmer of hope….who belts out songs to outline her story. Rose is working with Heath Brown, an award-winning and extremely talented composer on the audio components of the project; Sarah Duffus, an outstanding and versatile set designer will be creating the cabaret booth, and Sean Monro will be working as creative mentor.

Rose and Sean have recently co-written and performed a work in dialogue and movement entitled Legs Elbows Lips. This work produced by the Salamanca Arts Centre HyPe Program, had a sell-out season at the Sidespace Gallery in May 2012.

I am a comedic, physical and cabaret performer who revels in character comedy. I have performed improvised comedy, stand-up and cabaret regularly in the last five years. I was protagonist in the Tropfest film, “Dish Communication” (2009) which won the Flip Top Heart accolade in 2008. I was a founding member of the Short
Back and Sides Show (09-10) and co-hosted Alley Cat Comedy (09-10). I am becoming known as “Mamma Rosa”, a
buxom, brash Italian woman who cooks, dances, sings and does pasta readings, and have played her at many festivals and events around Tasmania and interstate. I have performed in the Terrapin production “When The Pictures Came” which was shown in Hobart and Adelaide (2011). Most recently I co-wrote and performed an original work as part of the HyPe initiative, with Sean Monro (May 2012) in a sell-out season in the Sidespace Gallery in Salamanca. I sing regularly at the A Cappella Lounge, at the Theatre Royal Hotel, as Mamma Rosa, and have recently MC’d the last installment of the show on the 26th of this month as this character, as well as hosted the Italian Street Festival March 2011/2012, singing alongside Tony Pantano and Dean Canan, and appeared at the Royal Launceston Show, roving over two days (2012). I have performed as “Vanillah” in the last Festival Of Voices, and headed the continuity department of Carmen Falk’s film “Our Man In Tasmania” (2012).

The winner of best soundtrack/score for the short film “El Monstro Del Mar” at the Oklahoma Horror Film Festival 2010, and has also been nominated for best original score with the same film at both the Maverick Movie awards and the Syracuse Horror, Fantasy and Sci-Fi. Film festivals in 2010. He has produced some astounding work and I would be honoured to have the pleasure of working with him again (he created the music for “Dish Communication”, a Tropfest Film entry I was protagonist in, in 2009).

Sarah Duffus has performed for the IS Theatre Company, has been a puppeteer for Terrapin Puppetry Theatre and a set designer for both. Most recently, she has directed the ‘Branch’ component for Second Echo Theatre’s production “Book, Branch, Bench” (2012).