The Mouheneer band of Tasmanian Aborigines used this area as a camping site rich in fish and shellfish, animals and plants. (Carbon dated middens suggest aboriginal use goes back 5,000 years.) With the arrival of the Europeans the aborigines were driven off the land and the town of Hobart was founded in Sullivans Cove in 1803.

From these docks, Hobart made its name as one of the world’s great whaling ports.  More than 65,000 convicts stepped ashore at Old Wharf, murderers were hanged from gallows, sailors and smugglers brawled in the back lanes and merchants made their fortunes by fair means or foul. In the 1900’s, apples and jam were processed here and Tasmania came to be internationally known as “The Apple Isle”.

The waterfront has always been the cultural heart of Hobart and the centre of Tasmanian life. Today, the vibrant, tangible history of this place mixes with a rich, authentic creative spirit, a world-renowned contemporary arts scene and a welcoming community of immense diversity.

These same buildings once housed equally vibrant but very different communities of people and activities.

Whaling and whaling ships were an integral part of the early development of Hobart Town. Southern Right Whales were so numerous and common in the Derwent River in the early years that a Governor reported that their noise kept him awake at night, and small boats were advised to stay near the riverbanks for fear of being scuttled mid-stream.

Whales were hunted for their oil (used for lighting and fuel), whalebone and baleen (used to make corsets and other fashion items). By the 1820s the shore-based industry was well established and earning a fortune in export sales. Within twenty years, there were nearly 40 locally owned whaling ships, employing more than a thousand men between them.

Southern Right Whales were originally the mainstay of the industry and were abundant throughout the coastal waters of Tasmania as well as the Derwent River.  As their numbers declined, the whalers sought out sperm whales further afield which required larger ships and greater financial backing.  More international ships began to arrive in Hobart and the docks swarmed with whalers, sealers and merchants from around the world. Pubs, inns and boarding houses sprang up all around the New Wharf – some of them, like Knopwoods Retreat remain popular today.

Captain James Kelly was one of Hobart’s most colourful and notorious whalers. Of convict parentage, he became a Master Mariner, circumnavigated Tasmania in a whaling boat, suffered a shipwreck on a sealing expedition to Macquarie Island and was Hobart’s Harbourmaster for some time. Kelly owned much of the land now occupied by the Salamanca Arts Centre, selling it before the warehouses were built. He constructed Kelly’s Steps and Kelly’s Lane to link his residence in Battery Point directly to his business on New Wharf. Part of the Arts Centre complex, Kelly’s Steps are used by many Battery Point residents for the same purpose today. 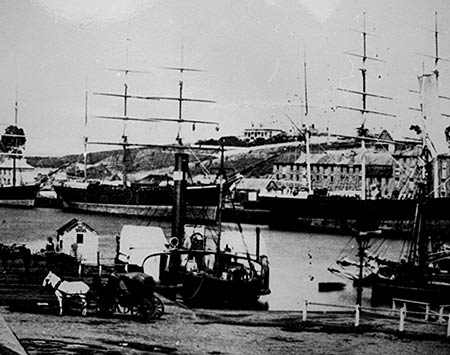 Sullivans Cove was the original site for European settlement in Tasmania, chosen because it had good fresh water, a deep and sheltered harbour and gentle slopes suitable for settlement. In the earliest years, all cargo arriving into or departing Hobart did so at Old Wharf next to Hunter Island, a tiny rocky island out from the main shore. Men waded across the shallow channel and women were carried in sedan chairs by able seamen (the prettier the woman, the longer the crossing apparently).

In 1820 a stone causeway was built to link the island to the main shore of Hobart, and port activities increased dramatically.  More than 65,000 convicts took their first steps into the penal colony at Old Wharf, jostling for room with whalers, seamen and merchants as they were marched in chains to their barracks in the town centre.

By the late 1820s the number of ships carrying whale products, import and export goods, immigrants and convicts in and out of port soon proved too much for the Old Wharf. The southern end of Sullivans Cove possessed deeper anchorage and better shelter, and in 1830 the Government agreed to build New Wharf where Salamanca Place now exists. New Wharf soon became one of the great whaling ports of the world and as Tasmania’s export trades increased, the need for dockside warehouses quickly grew. 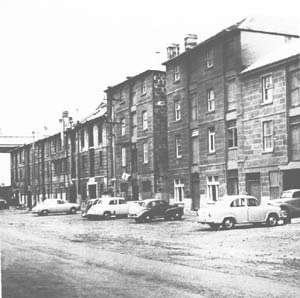 Askin Morrison was a merchant who arrived in Tasmania in 1829.  In the early 1830s he imported a cargo of tea from China that reputedly made him a profit of 10,000 pounds. It is thought that he used this money in 1834 to purchase a parcel of land fronting New Wharf.  Morrison immediately built a warehouse on the property (now 65 Salamanca Place), which became the base for his import and export business and where he stored whale oil and products.

By 1844 he had purchased an adjacent block from James Kelly and built a second warehouse (67 Salamanca Place). The building was built with a gantry at the first floor level that could lower barrels of whale oil straight out of the building onto a ship’s deck.

Adjacent to Morrison’s first warehouse, Richard Willis, a merchant arriving from London in 1834, built himself a warehouse for goods storage, with a covered archway leading to stables in a courtyard at the rear (65b Salamanca Place). Willis imported pianos, wines and silverware until his business collapsed in the 1840s depression. When he lost his building to a creditor, Morrison was quick to purchase it at a bargain price.

Captain William Young purchased the vacant block next door and built another warehouse in the same style as Morrison’s. Young was a whaler and timber merchant who also owned 600 acres of forested land on Bruny Island. In 1853 he sold his warehouse to Morrison.

The brothers, Hugh and John Addison originally built the two four-storey warehouses (77-79 Salamanca Place) in 1843 on land also purchased from Captain James Kelly.  John Addison, an architect, designed the buildings to flank the pre-existing Kelly’s Lane. When the brothers died in 1847 and 1848, the warehouses were retained in their estate and leased out for the next 30 years.

The three-storey bluestone building at the back of the Salamanca Arts centre complex has a less clear history, although it is thought to have been built in the 1850s. It appears that Morrison used the building at times for additional storage and also as a residence (he died in this building in 1876).

Throughout the nineteenth century, the whalers had so dramatically diminished the whale populations in the waters surrounding Tasmania that some species were on the brink of extinction. By the late 1800s Hobart’s whaling days were over; and, like the warehouses in Hunter Street (where Old Wharf had been), the row of warehouses that lined New Wharf were given new life as fruit processing and jam producing factories.

Tasmania’s climate was well suited to growing stone fruits and the export market for jam and processed fruit expanded rapidly in the 1890s.  During the next 50 years, the Salamanca Arts Centre buildings were expanded into each other to accommodate hundreds of workers producing millions of tonnes of jam and tinned fruit for export all over the world.

Many of the factory workers lived in the growing community directly behind Salamanca Place. Unlike the disease-ridden slums of Wapping on the other side of Sullivans Cove, Battery Point included the grander residences of merchants and factory owners alongside the humble cottages of labourers and tradesmen. Throughout the early twentieth century Battery Point was a rough working class suburb, filled with jam factory workers who were employed by IXL Jams in Hunter Street or WD Peacock & Sons in Salamanca Place. Many were women, who worked up to 50 or 60 hours a week during high season, running home to feed families at dinner time and then returning for an evening shift.

In 1910 IXL purchased the Salamanca Place jam factory from WD Peacock, but it continued to operate as before and was known simply as Peacock’s factory. After the onset of World War II the factory produced pure fruit juice and cordials as well as canned fruit and pulp for jam.

As sales slowed through the 1960s, many of the warehouses fell into a state of decline, with various buildings and floors rented out and others remaining unoccupied for years. The boom years that gave Tasmania its identity as “The Apple Isle” lasted until Britain finally entered the European Common Market in 1971 and Tasmania’s main fruit export market collapsed as a result.

A Gift to the People of Tasmania 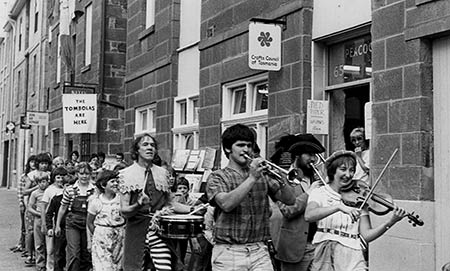 In 1972, Australian corporate giant, John Elliott, purchased Henry Jones IXL, Peacock’s parent company. By 1974 the Peacock Factory had been closed down and was on the market.

Within a few months, a group of visionary locals including Claudio Alcorso (one of Tasmania’s great arts advocates) saw in the buildings the potential to establish a vibrant community and arts centre in Hobart’s working port area. They formed the Community and Art Centre Foundation, established objectives for the potential Centre and pressured the State Government to purchase the old Peacock Factory. The Salamanca Arts Centre came into being in 1976 when the State Government, led by Premier Bill Neilson, purchased the seven historic sandstone warehouses in Hobart’s Salamanca Place (along with a cottage in Kelly Street) for the people of Tasmania.

The Government leased the buildings to the Foundation for 99 years at a peppercorn rent. In exchange, the Foundation was responsible for repairing and maintaining the dilapidated buildings and managing a range of diverse arts programs and events, funded through space and venue hire to artists, arts organisations and commercial tenants. Teams of committed and tireless volunteers moved in to clean out nearly 200 years of industrial dust and grime and bring the buildings back to life.

Today, the Arts Centre is the cultural hub of Hobart and the heart of the arts in Tasmania. The buildings themselves house visual and performing arts practitioners, craft and design professionals, film companies, galleries, craft and design shops and retail outlets, arts organisations and public spaces. Rich in history and alive with contemporary arts experiences, exhibitions, music and theatre performances, readings, festivals, forums and workshops – The Salamanca Arts Centre represents the community spirit and passion for the arts that is so much a part of life in Tasmania.