‘Dis-/Continuing Traditions’ showcases contemporary video art from mainland China. Although all of the exhibited works make use of modern digital-reproductive technologies, each can also be interpreted as maintaining significant relationships to China’s distinctive cultural traditions. Included in this are formal reciprocities between absence and presence (xu-shi), as well as vital resonances between art, humanity and nature (qiyun shengdong) characteristic of traditional Chinese culture.

This bringing together of modern technologies and cultural tradition extends a durable strain of innovative artistic practice in China exemplified by the “composite” photographs of Lang Jingshan (Long Chin-san) (1892-1995)—described as “China’s first photographer” and “the father of Asian photographic art”—which combine lens-based technologies and collage-montage with the multi-perspectival/temporal compositional principles of traditional Chinese ink-and-brush painting. It also resonates with a wider modernising East-Asian aesthetic sensibility exemplified by the Japanese Confucian/Zen Buddhist scholar and 20th-century garden designer, Mirei Shigemori’s (1896-1975) idea of a “timeless modernity” involving disjunctive reworkings of rather than radical breakings with the past, and the maverick late 17th/early 18th-century painter, Shitao’s (1642-1707) upholding of traditional Chinese artistic thinking and practice as having the potential to renew human society and culture.

‘Dis-/Continuing Traditions’ relates to extensive research conducted by the curators into the production, reception and display of art in modern and contemporary China. In addition to showcasing contemporary video art from China, the exhibition draws upon and adapts approaches to display proposed by the Hong Kong-based gallerist, Johnson Chang (Chang Tsong-zung) intended as conducive to the exhibiting of contemporary artworks engaged with traditional Chinese artistic practices and aesthetics.

The design of the exhibition ‘Dis-/Continuing Traditions : Contemporary Video Art from China’ draws on ideas and practices associated historically with Chinese literati-Confucian culture; in particular, the laying out of gardens as spaces for an intimist multisensorial play-appreciation (wan shang) of art and nature—as exemplified by the garden of the fifteenth/sixteenth century Chinese scholar Wen Zhengming. Among the literati—the scholar-gentry class that administered dynastic-imperial China for over two millennia prior to the beginning of the twentieth century—aesthetical feeling was considered integral to a life well-lived as well as the harmonious organisation and ethical governance of human society in reciprocal relation to nature.

Literati-Confucian principles impacted strongly on seventeenth- and eighteenth-century European neo-classical and romantic garden designs—such as that carried out by William Chambers at Kew Gardens, Surrey comprising the still iconic Kew pagoda – informing the promotion of diversified aesthetic experiences comparable in the European imagination to those associated with Chinese gardens.

The floor plan accompanying ‘Dis-/Continuing Traditions’ suggests ways in which viewers might meander between artworks as if in a garden setting. 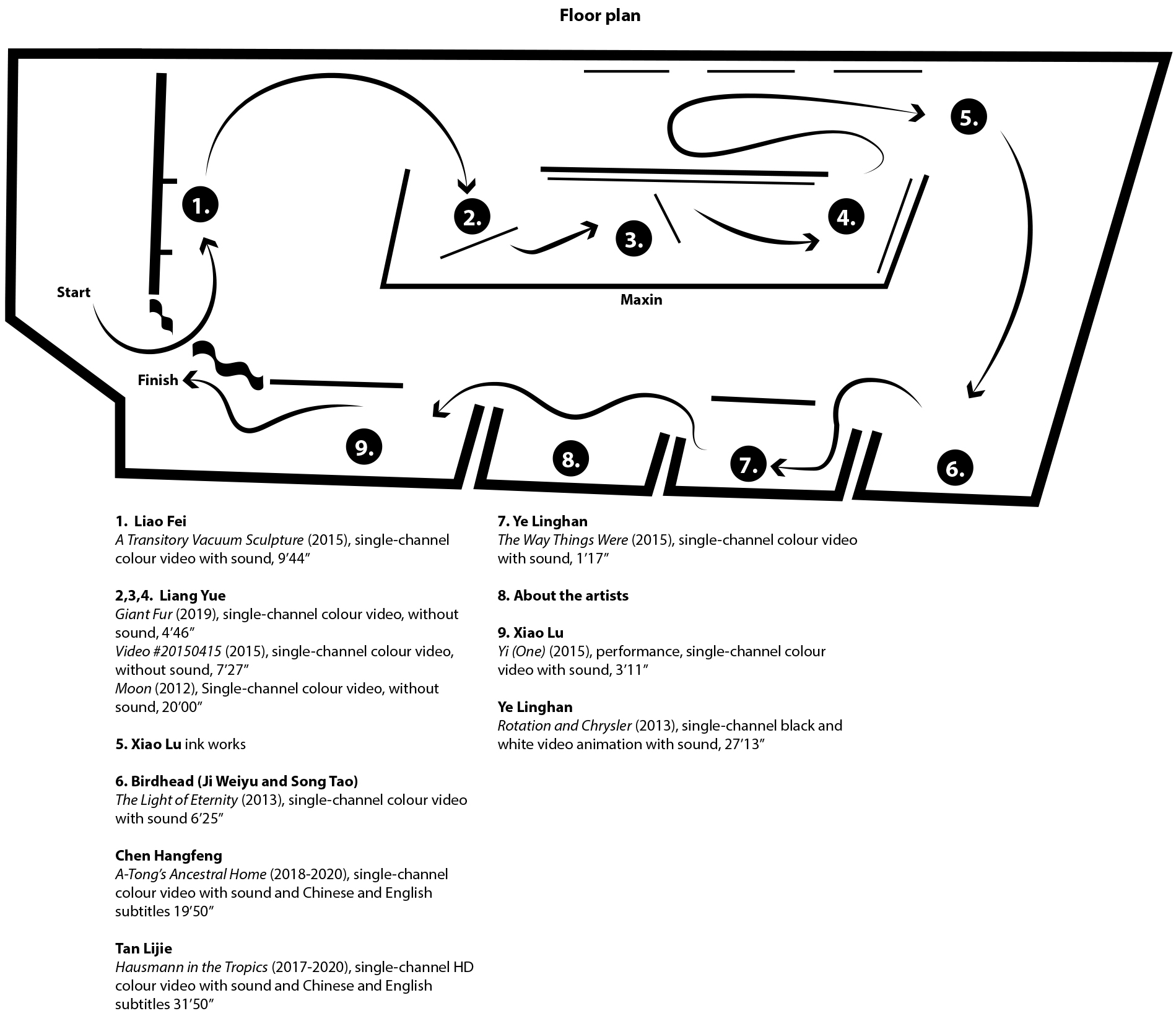 Extended contemplation is supported by the provision of seating throughout the exhibition space. Viewers are encouraged to linger and, in doing so, enter into unfolding states of resonant reciprocity with the artworks and the real and imagined worlds they represent. It is, of course, possible to pursue other ‘trackless’ paths of one’s own choosing through the exhibition space.

Central to the exhibition space is a fabric structure or ‘maxin’ enclosing the projection of three videos by the artist Liang Yue, each an extended meditation on nature. The maxin fulfils a practical role by softening encroachments of sound and light between artworks. It also stages a close engagement with Liang’s work intentionally resonant with intimist literati-Confucian play-appreciation. Liang has exhibited her video works in similar ways before.

On exiting the maxin, viewers encounter three ink and brush works by the artist Xiao Lu. Xiao is famous internationally for her, sometimes, unsettling performances. Much less well known is her parallel practice using the techniques and materials of traditional Chinese literati ink-and-brush painting and calligraphy. Xiao’s ink and brush works are produced spontaneously. Their significances are highly uncertain, even to the artist. They sustain the traces of literati-Confucian tradition while diverging productively from its established artistic conventions.

About the Guest Curators

Lynne Howarth-Gladston is an artist, curator and independent scholar. She graduated with a PhD in Critical Theory from the University of Nottingham (2012). Lynne has exhibited her painting internationally and was co-curator, with Paul Gladston, of the exhibition ‘New China/New Art Contemporary Video from Shanghai and Hangzhou’, staged at the Djanogly Gallery, University of Nottingham (2015). She was also an expert contributor to the BBC4 documentary, Kew’s Forgotten Queen: The Life of Marianne North (2016).

Paul Gladston is the inaugural Judith Neilson Professor of Contemporary Art at the University of New South Wales, Sydney. He has written extensively on Chinese contemporary art and aesthetics with regard to the concerns of critical theory. His book-length publications include Contemporary Chinese art: A critical history (2014), awarded “best publication” at the Art Awards China (2015), and Contemporary Chinese Art, Aesthetic Modernity and Zhang Peili: towards a critical contemporaneity (2019), which has been described as “a landmark work both in terms of cultural-criticism and art-historical analysis.”