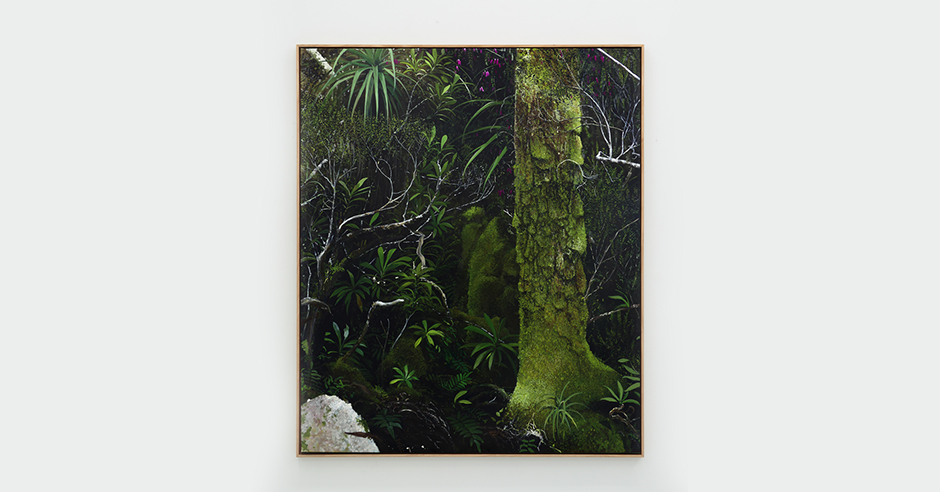 The exhibition draws inspiration from the O horizon, the top layer in a vertical profile of soil. This is the top strata of earth, the biodiverse site of microorganisms and fungi, decomposing organic matter from plants and animals, leaf litter, mosses and lichens.

The O horizon has metaphoric connotations of regeneration, and the naming of this underfoot layer as a ‘horizon’ is richly evocative. Rather than being in the distance, a horizon can be immediately beneath your feet.

The exhibition refocuses our attention to the earth, the O horizon and nutrient-rich topsoils that are vital to life and our environment.

Artists Wona Bae (South Korea) and Charlie Lawler (Australia) are a collaborative duo, who have been making work together since 2004. They are internationally recognised for their experimental and concept-driven installations and sculptures that navigate the visceral and symbiotic connections between people and nature. Central to their practice are the essences of minimalism, harmony and balance. Bae and Lawler present the natural world as active and central in an era of polarisation, inequality, inaction and apathy. Using a language of texture and reduction, their work combines immersive installation, sculpture, relief, sound and photography.

Bae and Lawler have held solo exhibitions at Heide Museum of Modern Art, Melbourne (2019/20); Backwoods Gallery, Melbourne (2022 and 2019); See You Soon Gallery, Tokyo (2017); and Koskela Gallery, Sydney (2016). They were commissioned to create a major new installation for The National at the Art Gallery of New South Wales (2021), and have undertaken other major installations throughout Australia, South Korea, Japan, Spain and the UK. Bae and Lawler have won the 2019 Yering Galley Award and the 2018 Yarra Valley Arts/ RACV Award. They have undertaken residencies at Artspace, Sydney (2021) and Gregans Retreat, Lisdillon, Tasmania (2020).

Sean Bailey’s paintings and sculptures are predominantly abstract, at once hard-edged and loose, precise and improvised. Bailey uses materials such as paint, paper, linen, wood, hydrostone and concrete to gather and harness a painterly energy, manifest non-representational forms and obscure collage and shapes drawn from his personal lexicon of painted formal, organic and symbolic imagery. Bailey is interested in the strict confines and parameters of the painting surface, seeing what can be conjured within the pictorial space, the process and chance of his practice, its limitations and also its potential to extend beyond the border of the picture frame.

Bronwyn Dillon is a proud born palawa woman with strong cultural connections. A muka nawnta — salt water sista. Dillon is a shell stringer and basket weaver, learning the ancient techniques, passed onto her by her elders. As well as being a cultural artist and knowledge keeper, Dillon is a mother to 3 pliri (boys), whom she is bringing up strong and proud. Dillon’s creations are inspired by her culture, her people, and Mother Earth. Each unique piece is created with strong cultural knowledge and explodes with positive energy.

Eloise Kirk works predominantly with collage and poured resins, creating works about suspension, erasure and fragmentation. Often these works contain a central rock or geological form, severed from its context and suspended in resin. Kirk’s works contain landscape imagery sourced from books, which are collaged into her sculptures and paintings, with the torn edges of the books they are ripped from left visible. Her landscapes and mountainous forms are devoid of recognisable locations and references, but favour mountainous peaks, vertiginous slopes, volcanic and geological formations: they are the landscape of the sublime.

Eloise Kirk lives and works from her home studio in St Mary’s, Tasmania, regularly showing in Sydney, Melbourne and Hobart. Having achieved Bachelor of Visual Arts with first class honours, she subsequently completed a Masters of Fine Arts with an Australian Postgraduate Award at Sydney College of the Arts in 2013. Since then, Kirk has exhibited solo in Sydney, Melbourne, Hobart and Christchurch, Chasm Gallery in New York. Her works have been part of group shows at Darren Knight Gallery, Roslyn Oxley, Art Space (Sydney), and the College of Fine Arts (Canterbury, New Zealand), Safari Arts Festival and the Underbelly Arts Festival. Kirk was a finalist in the Fisher’s Ghost Prize, the John Fries Emerging Art Award, the Macquarie Bank Emerging Artist Award and the Grace Cossington Smith Art Prize. In 2014 Kirk was awarded a two month Moya Dyring residency at the Cite Internationale des Arts, Paris. In 2019 she was the recipient of SHOTGUN8, a mentorship program supported by Contemporary Art Tasmania, MONA and Detached. Kirk is represented by Gallery 9, Sydney.

Kate Tucker’s works are created through a collage-like accumulative process of layering, where paintings are cut and combined, with some pieces left raw and others subjected to continuous iterative changes. Alongside large new paintings are a series of hybrid painting/ sculpture works that have complex ceramic bases holding and supporting paintings. There is an interchangeability between material characteristics of painting and sculpture, textiles and printing, and a play between what is holding and what is being held, with an emphasis on literal and metaphoric supports.

Alice Wormald creates paintings depicting strange constructed spaces where surface and depth, representation and abstraction and naturalism and artifice converge. The works often emerge through the process of image collection and collage. She exercises a controlled sense of representation, grounded in concerns around the act of painting and the physicality of paint itself, while reflecting a hallucinatory experience of space and nature.

Daine Singer is a curator and art dealer. Since 2011 she has run her own independent gallery, representing a group of fifteen artists from Australia and New Zealand with a dynamic program that includes solo exhibitions by gallery artists, as well as projects by unrepresented artists and occasional curated exhibitions. As an adjunct to the exhibition program, she has also published four limited edition artist books through her independent small press, VERSION: Lane Cormick NOHARDATTACK, Jordan Marani EGGS, Kate Moss Wild Thoughts and Peter Davidson Words/ Lines.

Before opening her own gallery, Singer has held positions including Gallery Manager at Anna Schwartz Gallery, Associate Curator at Experimenta Media Arts, and Curator at the Museum of Chinese Australian History. She has a BA (art history and history), Grad Dip in Arts Management, and Master of Art Curatorship from the University of Melbourne. Singer currently sits on the Business Advisory Council of the City of Yarra and the MLC Friends of Art Committee, previously she has been a board member of Blindside. She has been a mentor to the University of Melbourne’s Arts Career Mentoring Program, the Seventh Gallery Emerging Curator Program, Wundergym, Contemporary Art Tasmania’s Shotgun program, and The Smith Family’s iTrack Mentor program.
www.dainesinger.com

Salamanca Art Centre’s curated programs are supported by the Commonwealth Government’s Office of the Arts via the RISE Fund.