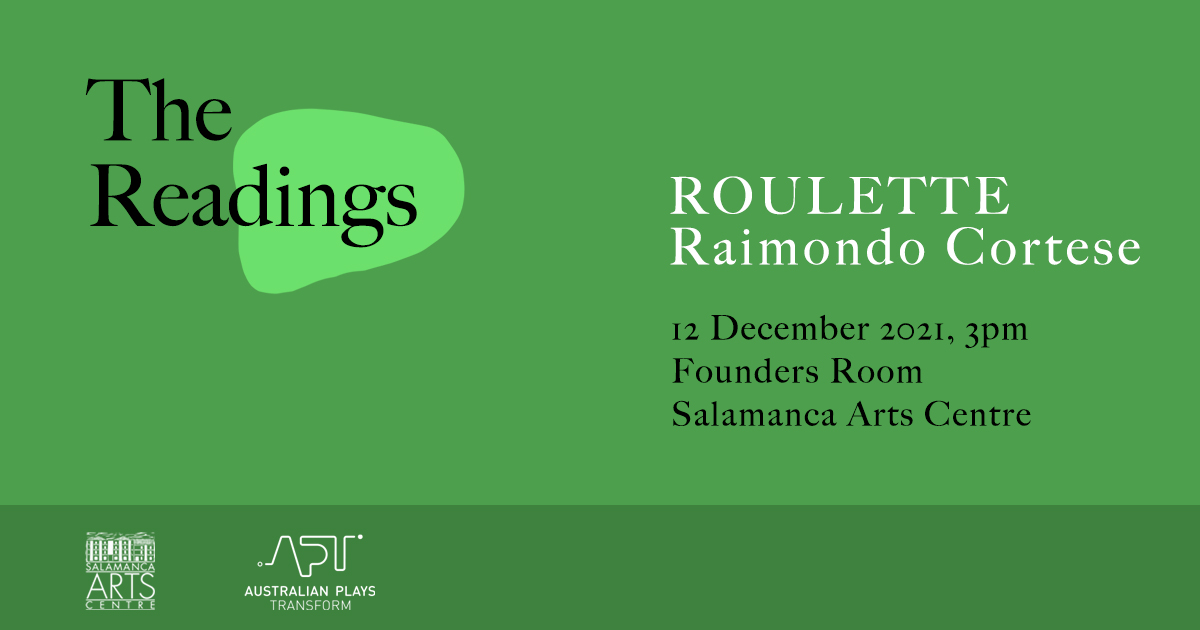 The Readings is a new series of exciting Tasmanian play readings which are happening at Salamanca Arts Centre in partnership with Australian Plays Transform (APT).

To begin this series, we are reading from Roulette by Raimondo Cortese – who will be joining us via Zoom on the day to talk about the origins of the play and what it’s like to see it performed in 2021.

Join us on Sunday 12 December at 3pm in the Founders Room to celebrate the talent that is generated on the island and to hear Raimondo’s incredible work delivered by eight Tasmanian actors.

Roulette is a series of twelve plays, set in twelve different locations. The plays are based on themes drawn from an ancient Chinese cosmology called the 12 Branches of Life. Roulette considers chance meetings. In each play, two people meet in different situations, allowing for an exploration of a revealing mosaic of human interaction across a range of emotional landscapes.

The pieces being read are:
Inconsolable
Hotel
Borneo
Break-In

The session will be followed by industry drinks – all welcome. 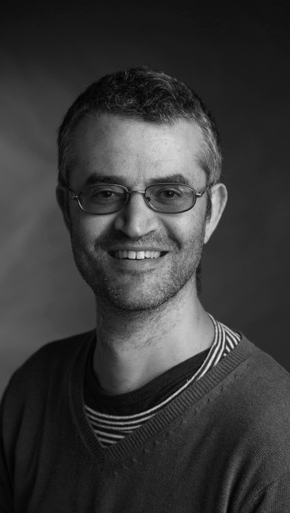 Raimondo Cortese graduated from VCA School of Drama in 1993. He was a founding member of Ranters Theatre, serving as Artistic Director from 1994 – 2001. Ranters have been regularly programmed in international performing arts festivals and venues since 1999.

He has written over thirty plays which have been performed in over a dozen countries, including Features of Blown Youth, Roulette, St Kilda Tales, The Wall and The Silence. Holiday won a 2007 Green Room Award for Best Australian Writing, and Intimacy, premiered at the Malthouse Theatre for the 2010 Melbourne International Festival of the Arts. He was the recipient of a 2010 Australian Leadership Award, and was awarded the inaugural Patrick White Fellowship by the STC in 2011.

Raimondo has also written for film (The Boy Castaways), television and radio, as well as visual and experimental texts. His fiction includes a collection of short stories – The Indestructible Corpse (Text Publishing 1998). He teaches script writing master classes internationally, and lectures in Master of Writing for Performance in Theatre, VCA School of Performing Arts, Melbourne University. He is currently in development with Nathan Maynard on feature film Musquito. 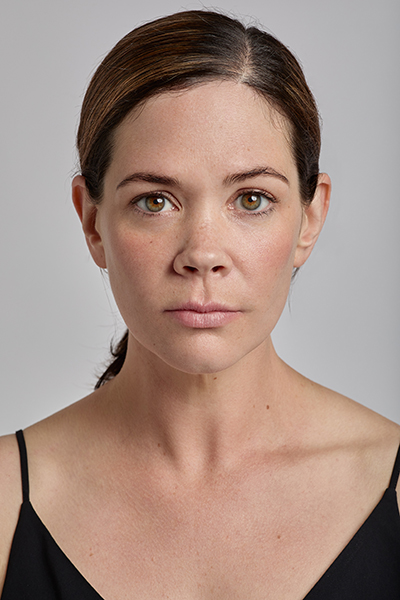 Alison Stanton-Cook was born in Hobart, Tasmania, enjoying a childhood of weeks at her grandparent’s farm and adventures up the coast with family. As a young teen she developed a love of acting and the stage – performing in local musicals and taking summer classes with NIDA. At 18 she moved to Sydney to attend Actors Centre Australia, where she trained under Dean Carey and was fortunate to work with incredible directors like Jennifer Kent and Gale Edwards. Upon graduation she signed with Sherrin Rickards Management where she secured TV commercial roles, a few short films and worked with AAFTAs students. Deciding to go in another direction, Alison started working in Public Relations with personality and brand publicist Maria Farmer. Following this she worked as a freelance fashion writer, a marketing and communications manager and eventually founded a scented candle company.

Alison and her partner Rob started a family and relocated back to Hobart, raising their two daughters, Maddie and Imogen. Alison is now teaching acting, writing a TV series and a short film, along with rediscovering her love of acting by studying with renown LA acting coach Lesly Kahn & Company. 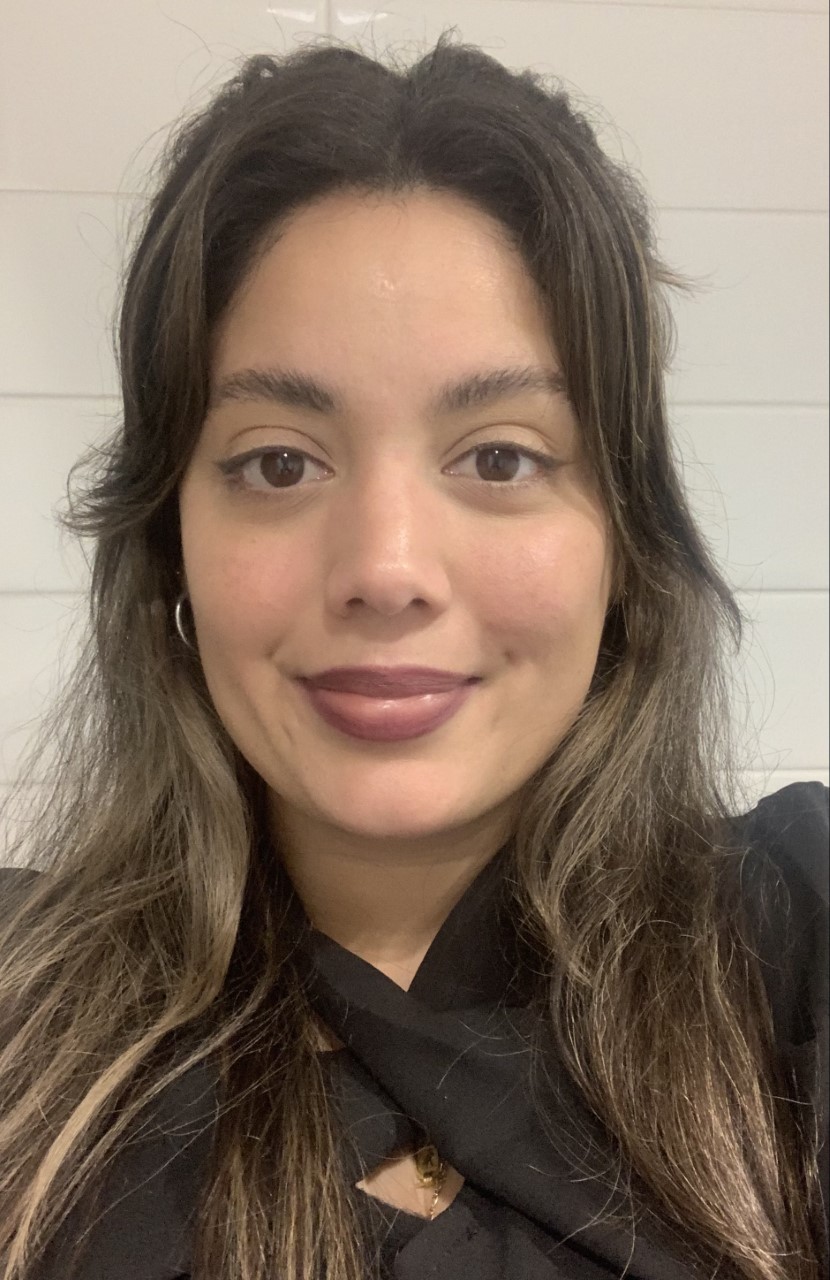 Moving from the Big Smoke to the Sleepy Island when she was 16, Amrita (um-rita) has had an eclectic collection of life experiences. An ambivert yet still a natural performer, she started young, in school holiday acting workshops with the Australian Theatre for Young People and NIDA. Drama K-12, obviously. You may have caught her on your television screen in the odd TVC, or perhaps for a brief moment in time on The Gloaming. She can sing, she can act, she can’t dance. She does do stand-up comedy sometimes, but it scares the absolute shit out of her. Amrita has drifted away from the acting scene numerous times, but it just keeps calling her back, and now we are here. Her colourful background has given her deep and unique insight into the world and its workings – a blessing or a curse, perhaps both, we’re about to find out. 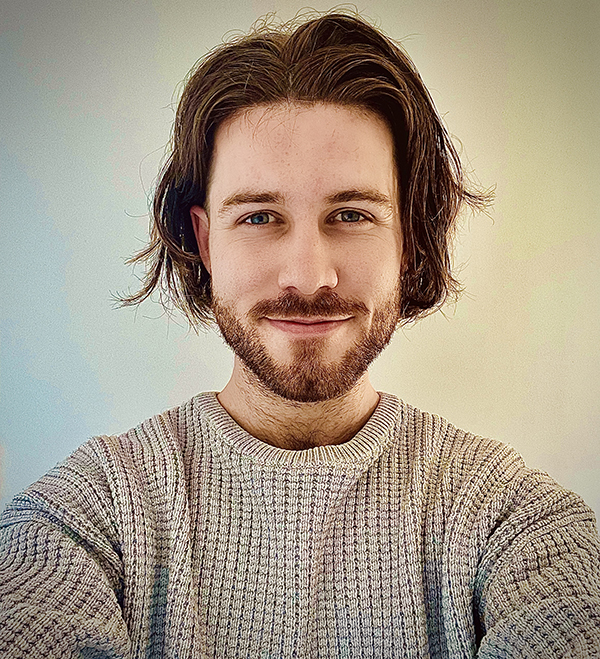 Bailey is a filmmaker who always finds himself acting in one occupation or another. Whether it be at the request of his fellow camera crew to have him play the convict being whipped on the rack for the sake of their own amusement, or as an emergency fill-in for a role everybody in the production team somehow forgot to cast, he finds himself acting on most of the sets he works on. Now, he figures he’d better hone the craft just in case it happens again.

Bailey has also won an Errol for best supporting actor in 2017 and was nominated again in 2018. 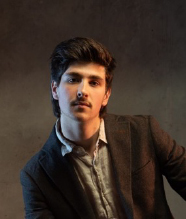 Bryan is a 20-year-old second-year student at the University of Tasmania majoring in Theatre and Psychology. During his studies so far he has had experience performing excerpts of monologues and duologues from The Glass Menagerie, The Seagull and The Sea.

He has always had an interest in theatre and taken drama classes both in and outside of school/college. He also previously studied with Sara Cooper at Cooper Screen Academy for one year. Other than acting, Bryan enjoys Latin dancing especially salsa, social soccer and is learning to play the guitar. Bryan is excited to contribute to the Tasmanian theatre community and gain more practical acting experience.

Genevieve is a bilingual performance artist who uses Bouffon, Drag, Circus, and physical comedy to examine the significance of social masks within theatrical frameworks.  Her artistic practice focuses on how audiences connect/relate universally to colloquial stories.

She is an actor, writer, director, circus performer, mask maker, video editor and teacher of circus fundamentals, mask play and devising. She has toured numerous Fringe and Arts Festivals around Australia, and worked with theatre companies across Australia, Italy and Belgium. She has been a working artist for over 10years

Genevieve has a diploma in Commedia dell’Arte (FAVA, Italy) and Movement Analysis and Theatre Creation (Lassad, Belgium)— and a bachelors in Theatre (QUT). 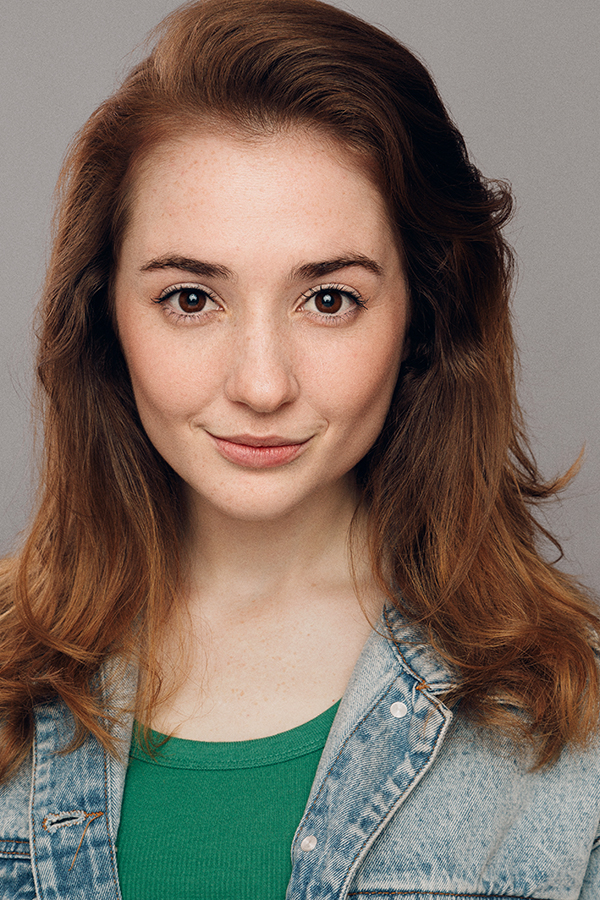 Imogen Storm is an actor, writer, director and overall artist passionate about the creative industry and the stories that can be told through the arts. She has graduated from the University of Tasmania with a Bachelor’s Degree in Contemporary Arts; Theatre. Since graduating at the end of 2016, Imogen has worked in stage & film as an actor, directed two productions, and written a full length play. Imogen has most notably performed in Melbourne and Tasmania, mostly spending the last couple years enjoying the home soil of Tassie. Imogen’s most recent credits include; Just A Song (actor, short film), 60 Minutes (actor, tv episode), The Balding (actor, feature film), Lotus (director & playwright), Anatomy of A Suicide (actor, theatre), Iron (director), and many more. Imogen Storm is constantly evolving her craft and is eager to learn from collaborating with others and hopes to work with more people in the future! 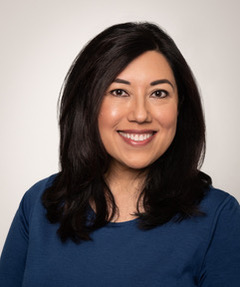 Suzanne is an actor and voice over artist of English/mixed European and Malaysian Chinese heritage. She graduated with a joint honours science degree from Imperial College University of London in biochemistry with management science. She gained grade 8 piano and theory of music from the Royal Schools of Music London, and qualifications in art history and painting from Macquarie University Sydney.

Her multicultural background has given her an excellent ear for accents and dialects, particularly Asian ones. Suzanne has landed featured and extras roles on The Gloaming, Rosehaven, various short films, and also in some local TVCs. As well as acting, she has also worked behind the scenes in production and as an attachment in the locations department on The Gloaming.

Her culturally diverse life experience brings variety, interest and truth into her acting.