During June, as part of Dark Mofo 2017, Salamanca Arts Centre will host a number of exciting new projects – including live music, installations and new text-based theatre.

“Salamanca Arts Centre is excited to once again collaborate with Dark Mofo, and we look forward to welcoming local, interstate and international audiences into the Arts Centre,” says SAC’s Acting CEO Joe Bugden. “In particular, SAC commends this year’s festival team for their ongoing commitment to recognising, valuing and presenting new Tasmanian work.”

The Long Gallery will house Outposts, curated by Brendan Walls, in which “lost signals and voices from the electro-magnetosphere seethe and mutter in the dark.”

Presented by Dark Mofo from 7 – 11 June, Episode 2: The Hanniford Tapes, written by Carrie McLean, sees a psychiatrist obsessing over the murder committed by her client, as a woman’s voice consumes her mind. 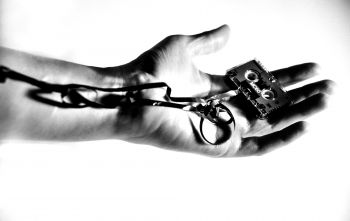 In Episode 3: The Illustrated Girl, written by Alison Mann, a woman wakes up to find a sinister tattoo on her hand.

Presented as a double-bill, these stories are created by the collective using experimental live foley and sampling techniques to create a unique theatrical experience.

Also in this year’s Dark Mofo, the Peacock Theatre will host the durational The Second Woman, a mesmerising 24-hour performance in which the artist invites one hundred men to star opposite her in a scene adapted from John Cassavetes’ American drama, Opening Night (1977).

During June Salamanca Arts Centre’s program will also include:

Both sides of either wall |
OLDER THAN LANGUAGE