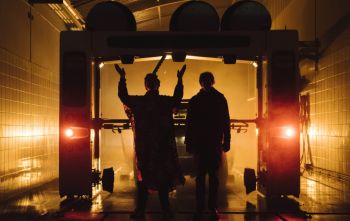 Their work, Crush, has been recognised for Sound Performance in the Contemporary and Experimental Performance category. It was presented at Arts House as part of last year’s Festival of Live Arts (FOLA).

“We really enjoyed making this work and it was fantastic to be able to present it in Melbourne at Arts House on the back of the Junction Arts Festival Season, which was supported by the Salamanca Arts Centre,” says Sam Routledge.

“It’s always good to be recognised by your peers, and to receive this Green Room award from a panel of Melbourne-based artists, who see so much good work, feels really special”.

“Crush really connects with audiences,” says SAC’s Live Arts and Events Coordinator Kelly Drummond Cawthon. “It’s been so rewarding to be able to nurture this dynamic Tasmanian team and watch the project go from strength to strength.”

Crush is an immersive live artwork for auto car washes that explores new notions of slavery and servitude in a robot age. Audiences experience this work from inside a vehicle as it is being cleaned. Evoking the drive-in cinema, audiences tune into the soundtrack via the FM radio in their vehicle as it is transmitted live on site. As the large automated robot goes about its work, Sheridan’s score syncs to its movements, in a powerful and beautiful examination of vulnerability and power.

The development of Crush was supported by Salamanca Arts Centre’s HyPe (Hybrid Performance) Program in 2015-16. HyPe supports the creation of innovative, contemporary hybrid performance by supporting Tasmanian artists to take conceptual leaps and to challenge the existing limitations of traditional performance and theatre.

Composer and artist Dylan Sheridan is supported by HyPe in 2017 and will show a new work at Salamanca Arts Centre later in the year.

The Green Room Awards were established in 1982 and are regarded as Melbourne’s premier peer-presented, performing arts industry awards.
Crush was originally co-commissioned and produced by Junction Arts Festival and Salamanca Arts Centre through Like HyPe in 2015. In 2016 it was presented by the City of Melbourne through Arts House at the Festival of Life Arts (FOLA).

The Best of the Con | feat. The Gus Leighton Quartet | JAZZAMANCA 2020