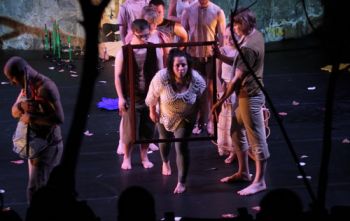 Rite of Spring, image credit Whats On In app

Salamanca Moves wrapped on Saturday 1 October, concluding with a public dance party and a closing ceremony with members of the Tasmanian Aboriginal community. Tasmanian and visiting dancers participated in over 60 events, with members of the public, ranging from school children to mature movers, from community groups to acclaimed international artists such as Neta Pulvermacher (Israel), Sannamaria Kuula (Finland), Ana Degues (Portugal), Cari Ann Shim Sham (USA) and Liz Aggiss (UK).

“The feedback from many artists has been very positive with many saying that the exchange of ideas enabled by the festival will influence their practice,” says Salamanca Arts Centre CEO/Artistic Director Rosemary Miller. “That’s testament to both Salamanca Moves Curator Kelly Drummond Cawthon’s planning and to the generous and collaborative spirit of participants.”

“We thank all the artists and the local community for getting behind this inaugural event, and the dedicated team of staff and volunteers.”

The world premiere of Rite of Spring by Tasmania’s Second Echo Ensemble proved to be one of the hits of the festival, with the season quickly selling out. Second Echo performer Luke Campbell was one of three artists asked to re-present their festival work during The A.W.A.R.D (Artists with Audiences Responding to Dance) Show on 30 September.

Dianne Reid and Melinda Smith’s Dance Interrogations was awarded $5000 and a slot in next year’s Ten Days on the Island via an audience choice vote. Smith, a dancer living with cerebral palsy, and Reid, and screen dance artist, develop improvisational dance performance that interacts with video projected imagery. 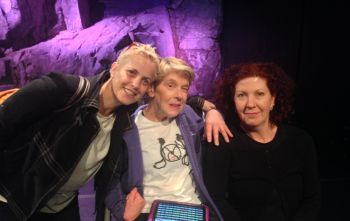 Neta Pulvermacher (left) with performers Melinda Smith and Dianne Reid, who were awarded development funds for their work.

“I was delighted with the creativity and diversity of Salamanca Moves’  A.W.A.R.D Show,” says Ten Days On the Island Artistic Director David Malacari. “Congratulations to Melinda Smith and Dianne Reid. Audiences at Ten Days on the Island in March will have the opportunity to see a thought provoking and sensitive work in which the body’s physical restrictions are used to wonderful creative effect.”

Prizes were also awards in for the Salamanca Film MOV-ies program, curated by Cari Ann Shim Sham of New York University Tisch School of the Arts.

“We were so fortunate to have Cari Ann Shim Sham with us to curate this dynamic program,” says Salamanca Arts Centre’s Rosemary Miller. “It was an inspiring range of dance-on-film projects and we congratulate all the filmmakers.”

The film awards announced were:

The biennial Salamanca Moves will return in 2018.