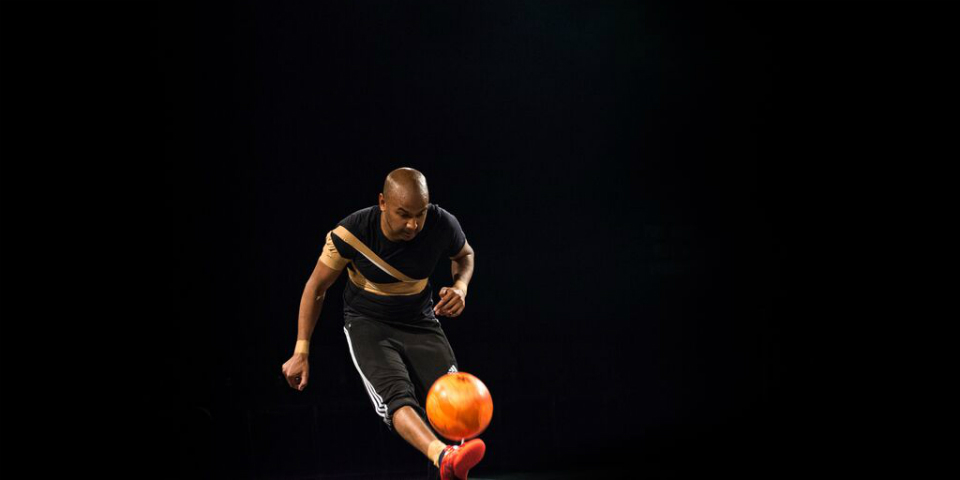 A champion of unorthodox artforms, former footballer Ahilan Ratnamohan has fused dance, sport and live performance to create a thrilling movement work derived entirely from the global phenomenon of soccer! Ratnamohan will evoke the atmosphere of a football match, filling the theatre space with a visceral, charged energy and provoking the audience to lose themselves in his unique version of the ‘game’.

As Ratnamohan begins his contemporary pas de deux with a soccer ball, he adopts the mindset of an elite soccer player on the pitch – striving for success, toying with his spectators, seeking admiration, and showing off his athletic prowess on the field.

This is football as theatre, stripped back, extracted, frozen, repeated and abstracted. Beautiful and ugly at once.

“…The physical and emotional content …was tremendous.”
– Crikey Daily Review

“…its movements in the confines of a stage… convey(ed) the drama, passion and personality of the world game.”
– perthculture.com

Developing, producing and touring new Australian performance nationally and internationally Ahilan Ratnamohan is a theatre-maker creating physical performance inspired by sport, film, language and unorthodox forms. Since 2007, he has toured and performed in Australia, South Africa, and Europe. Since 2012, Ahil has been based in Antwerp, Belgium, where he has developed his working methodology. After graduating in 2005 from Film Studies at the University of Technology Sydney, he attempted a professional football (soccer) career in the Netherlands, Sweden and Germany. His experience as a footballer deeply informs the style of work he creates.

Toured produced by Performing Lines for Mobile States, with the support of the Australian Government through the Australia Council, its arts funding and advisory body.