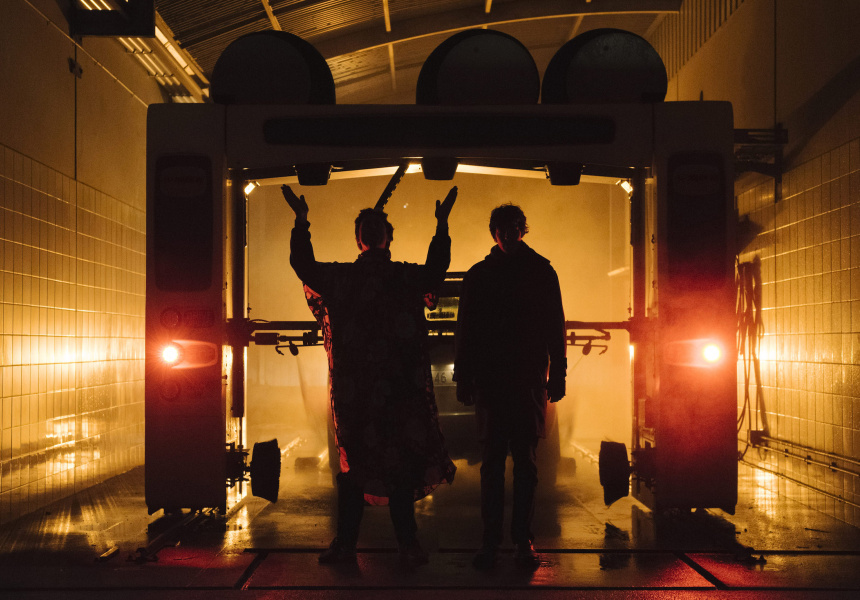 Crush is an immersive live artwork for Auto car washes that explores new notions of slavery and servitude in a robot age. Created by theatre maker Sam Routledge and composer Dylan Sheridan, audiences experience this work from inside a vehicle as it is being cleaned.  Evoking the drive in cinema, audiences tune into the soundtrack via the FM radio in their vehicle as it is transmitted live on site. As the large automated robot goes about its work, Sheridans score syncs to its movements, in a powerful and beautiful examination of vulnerability and power.

Crush was originally co-commissioned and produced by Junction Arts Festival and Salamanca Arts Centre through Like HyPe in 2015.

In 2016 it was presented by the City of Melbourne through Arts House at the Festival of Life Arts (FOLA).

Dylan Sheridan is a composer and sound artist from Tasmania, Australia. He began his formal studies in composition at the Tasmanian Conservatorium of Music, studying with Douglas Knehans and Don Kay and completed his Master’s degree at the College-Conservatory of Music in Cincinnati, USA, where he studied with Joel Hoffman and Michael Fiday. Also a visual artist, Dylan is interested in expanding the theatrical nature of concert music through the use of image, lighting, musical sculpture and unconventional use of space. His works have been performed in concert halls, festivals, art galleries and living rooms, in Australia, the USA and Europe, by individuals and ensembles such as The Song Company (AUS), Cafe MoMus ensemble (U.S.A), and Tim Munro (from Eighth Blackbird), and performed at events such as the MusicX festival (Switzerland), Sound-to-Light/Dark MOFO, Networked Art Forms: Tactical Magick Faerie Circuits, MONA FOMA 2013, which featured the premiere of his chamber opera Starchild, and Next Wave Festival 2014 which featured his sound-theatre work Terminal. Through residencies and mentorships Dylan has worked with companies such as Chamber Made Opera, IHOS, and Aphids. Currently he is developing a new work for caves and planetariums.

Sam Routledge is a director, puppeteer and known innovator in contemporary puppetry. He has a B.A. in Communication (Major – Theatre and Media) from Charles Sturt University, Bathurst and a Post Graduate Diploma in Puppetry from the Victorian College of the Arts. He has performed with Terrapin, Arena Theatre Company, Kim Carpenter’s Theatre Of Image and LATT Children’s Theatre Seoul. Sam was a member of My Darling Patricia, having performed in Kissing The Mirror, Politely Savage and Night Garden. Most recently, he initiated the Malthouse commissioned production Africa, which was nominated for a Helpmann Award and toured nationally in 2011 through the Mobile States program. As a creator of original performance, he co-created Operation with Martyn Coutts which premiered at the 2006 Next Wave Festival and had a return season at the Arts Centre Melbourne and Is Theatre Hobart. He initiated and co-created the object theatre production Men of Steel, which has toured to the UK, Hong Kong, China, Korea, Japan, New Zealand and Singapore. In 2008, he performed with Danish Children’s Theatre company Gruppe 38 in their production The Holy Night and participated in the Art of Play workshop run by Chiara Guidi from Socìetas Raffaello Sanzio.