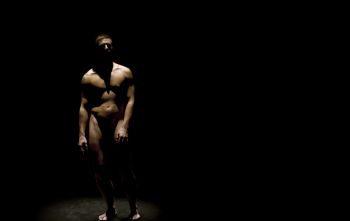 The cutting-edge work is presented as part of Salamanca Arts Centre’s HyPe Residency program in the Peacock Theatre.

“This is such an intimate performance. I am looking forward to meeting the audience from down under and to being turned upside-down by this experience,” says Bruno Isaković.

Denuded was created during Bruno Isaković’s artistic residencies in Art Workshop Lazareti in Dubrovnik in 2013, through the Perforations program and the Performing Arts Network.

It went on to appear in numerous festivals, including New York Queen International Arts Festival in 2014, and has been presented in various iterations—included as a duet and as an ensemble piece.

The current version of the work, with Bruno Isaković performing solo, has toured internationally to over 20 countries, including a North American tour USA (New York, Chicago, Washington, Los Angeles and San Francisco) before making its way to Australia this month.

Denuded is about the body, movement and stillness, breathing and, most importantly, about a constant contact with the audience. The confrontation of the naked body and the gaze is the work’s driving force.

“[It] did feel significant. It was as if we all had been somewhere together, no matter how we had dressed for the journey. —Brian Siebert, New York Times (review of the 2014 production)

Tickets available online and at the door.

ABOUT THE CHOREOGRAPHER / PERFORMER Bruno Isaković was born in Zagreb, and graduated in contemporary dance in Amsterdam. In Zagreb he is a member of the Studio for contemporary dance, collaborating with numerous choreographers, regular freelance choreographer and holds dance workshops. Bruno Isaković graduated with a degree in contemporary dance from Amsterdam School of the Arts in 2009. In 2010, he returned to Croatia to continue his intense activities in the field of dance art, and in September 2011 became a member of Contemporary Dance Studio. He works with different choreographers, creates his own performances, and holds dance workshops. Isaković has received various prestigious scholarships, as well as the following awards: Deutscher Akademischer Austausch Deinst – Stipendienurkunde (2010) and Jury Award and Best Solo Dance at Solo Dance International Festival in Budapest.

FURTHER INFORMATION The idea of Denuded is born from the framework set by the previous Isaković’s work Invocation, in which the performer with physical expressions and stage presence that goes far beyond the purely physical movement, reminiscents of the relationship between the secular and the spiritual. The performance Denuded continues this research and deeply touches physical transformation, thus freeing them from the automatic attribution of meaning to what we at a given moment are able to see, recognize, experience. Denuded requestions the relationship with the audience through a feedback loop that causes a significant transformation of the artist’s body, and Isaković in this new version of his performance bypasses classical staging and sets his body in the middle of the auditorium, thus opening a new sculptural aspects of performance and capabilities of communication with the audience.